Continued from Passover and the Freedom of the Metaverse.
In the previous post I discussed how Steam allows people to be the common thread uniting different online virtual worlds.

Now let's talk about the other element which connects virtual worlds to each other and to the real world: money!

Before I go on, I neglected to mention another social aspect of games which touches on the metaverse: clans!
Clans are clubs of players usually based in a particular game but depending on the type of game and cohesiveness of the social structure sometimes branch out to other similar games or even to quite unrelated games. Thankfully my squad-mate Sp4wn reminded me... thanks mate! 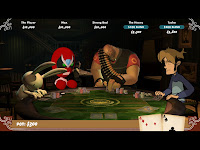 The story begins with inventories and specifically Poker Night at the Inventory, an odd game which pits the player in a poker game against four characters from other computer games and web comics.

Occasionally one of the characters is short on cash and offers a personal item... win the hand and you've won the item but here's the surprise: the items you win show up in your inventory for a completely different game: Team Fortress 2!
Just launch Team Fortress 2 and start shooting your friends with your new Lugermorph while wearing your new shades.


This simple innovative step proved to be a marketing bonanza both for TF2 and for the new Poker Night. Some time after this Team Fortress 2 became free to play, with income coming from selling items to players for small sums of money, but buying and playing Poker Night at the Inventory is still the only way to get these unique items.

The best things in life are for trade

The next step came when Valve expanded the inventory system to allow users to trade between inventories.

To appreciate this you need to understand that in the past you could only trade an item like a gun or a hat in TF2 for another TF2 item. Have too much junk items? Trade them for someone else's junk!
The creation of a cross-inventory trading system means if you've played TF2 a lot and got lots of junk, you can trade it for stuff you need when you start playing a different game. At the moment this doesn't span a whole lot of games.
But Valve didn't stop there... the inventory system now also encompasses your game library as well. If you bought or received as a gift a downloadable Steam game and have not installed it yet (it's essentially still in the box) it is a tradable item just like any other. You can trade a game for items or for another game.

In other words, you can trade items in the real world for items in different virtual worlds. A global economy now connects not just different continents in cyberspace but also reaches out to the physical universe.


The big idea here is a confluence of money and value.

Valve hit upon the one thing that could make the metaverse useful for both users and developers. Allowing items to be traded freely across worlds is a positive value just like the tradability of stock in the real world. When users know they can sell, they're more likely to buy, which gives an incentive for developers to connect their worlds and to create viable products within those worlds.

Even an operator of a free to use world with no items for sale could profit by charging for the right to export or import items, even if it's only a one time fee. I paid for a cheap item in TF2 just to gain the right to trade and have more room in my inventory to store stuff.

It's hard to see where exactly this will lead, exactly because it represents what I started my previous post with: Freedom!


I'm sure I'll think of more to say about this and I hope a few of my readers will chime in with other examples of the economic aspects of the metaverse, but for now, I'm done.

Coming soon: a headache inducing post about ontological operations. Don't say I didn't warn you!
Posted by Yossi Preminger at 23:35

Yossi Preminger
Tel Aviv, Israel
I like thinking and talking about problems, which is why I'm a treasure hunter, hunting for technological problems and solutions!

Some stuff to check out: