The Insignificance of Ideas

A few years ago my friend and partner O and I had an argument over some idea which I considered a potential solution but which was according to him "an idea for an idea for an idea". (FYI Hebrew has no word for "concept")
This annoyed me a great deal, not only because he was putting down our idea but because I felt there was something inherently flawed with this regression, lacking any definition and clarity, beginning or end.

Some time later I realized the key to this unease lay in my knowledge of TRIZ and the way it links problems and solutions.

In the Interest of Clarity:


To make things easier, whenever I say "idea" I'm referring to the notion of an idea and when I want to actually use the word idea in a sentence, I'll just say notion or thought instead. So far so good?
I'll also use the word concept, which to me means something more specific than an idea but also more limited but in a good way, as something which is harder to stretch and bend out of shape until it means nothing.

I know I'm straying a bit from conventions in philosophy and linguistics here and I'll appreciate any input on how to improve this.


I've highlighted the important modifications in every stage.

Is #1 "hungry" an idea?
Hunger is certainly a clear concept and a problem. People sometimes say idea when they really mean they've found a problem or need which they want to address.

Is #2 "breakfast" an idea? It's a very generic concept and would not be considered an idea without referring to need #1.

#3 improves on #2 by adding the element of time, making this more like a plan.
Does that mean #2 was just an idea for an idea?

Now, finally we have a really good idea: #4 is an actual idea I had which didn't pan out. Too much red tape.

Let's look back at the history of this complex idea: at what point did this become an idea and not an idea for an idea?
Was there ever an idea for an idea or just a series of discrete ideas growing in complexity? How far can we go back before there's clearly no idea at all?
Is the final idea really an idea or does it graduate to a solution or a blueprint for one?
What if we improve the idea, does the previous version get downgraded?

Here we have a clue: the screwdriver idea is meaningless unless quite literally directed at a screw's head.


Besides the use of the word "idea" to refer to a problem/need or to a concept there is another common error... one which is more insidious.
It is often implied that an idea is a point sitting static in idea-space.
Even when if it's understood that ideas are not exactly static points, it's still natural to tend to handle them as static. For example being shy about stretching them too far from their point of origin.

If this ideas were indeed points, the screwdriver really would be an idea, regardless of what came before and after. yet we can clearly see that to conceive of a long pointy thing with a flat end is meaningless without directing it somewhere.

This is why I consider ideas vectors rather than points.

For me an idea should be a vector in the direction of a solution, relating to a problem. It does not exist in a space of ideas but in a space of concepts, which are static. The screwdriver is a concept. The idea of having a special tool to handle screws is not itself a solution, but it is a direction along which the search for solutions can be conducted.
This vector might even be successfully applied to a different but analogous problem. The same cannot be said of point-ideas.

The terminology can be clarified further and made more productive with the dialectic of TRIZ, which offers a way to relate problems to solutions and direct the search for these solutions.

In the Language of TRIZ


TRIZ does two things:
First it clarifies the problem and reduces it to it's essence by identifying an inherent contradiction. The contradiction is a clash of incompatible requirements which prevents the problem from being solved with existing methods, thus requiring a creative or inventive approach.
Secondly, TRIZ defines a clear direction for search:
Ideality, expressed as an Ideal Final Result (IFR), provides a beacon which makes sure changes from the original system serve to improve the system.
It is usually stated as:
[System X] performs [Function Y] by itself.
Often within Y it's stated when the desired action needs to occur, usually on some condition, for example a fire extinguishing system activating when there's a fire.

When seen through the lens of this dialectic, there is a clear starting point (the system and problem) a goal (the ideal system) and the obstacle to be overcome (the contradiction).

Based on this I suggest a new vocabulary:

Solution concept:
An outline of a solution which bridges the gap between the problem and the solution (overcoming the contradiction), but needs to be fleshed out with details. A solution concept need not bridge the gap completely but it should extend all the way, with smaller gaps which require less creative steps.

Search concept:
A guiding principle which has a potential to bridge the gap and overcome the contradiction. 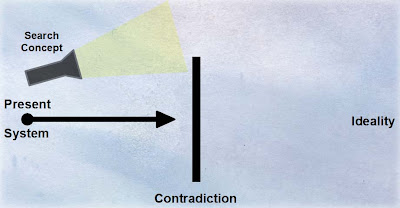 Inventive or creative step:
Something which is not one of the above but which either helps make the contradiction seem less impossible or makes the gap less wide and intimidating.

Try to use this when thinking about or discussing a problem and let me know what you think!

When referring to inventive steps with regard to the gap and contradiction I do not intend to imply that a revolutionary inventive solution can be wholly constructed out of small steps, rather that these small steps can bring the inventor closer to the edge of the ravine making the big leap across a bit easier.
Posted by Yossi Preminger at 15:31

Email ThisBlogThis!Share to TwitterShare to FacebookShare to Pinterest
Labels: TRIZ

Yossi Preminger
Tel Aviv, Israel
I like thinking and talking about problems, which is why I'm a treasure hunter, hunting for technological problems and solutions!

Some stuff to check out: